Birthday Card for my Lovely Son 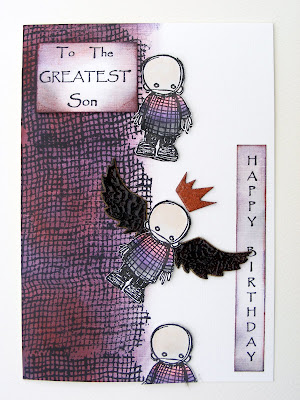 This is a card I've just finished for my son's birthday which is the day after his daughter's later this month. My friend Jo loaned me the Stampotique image. I think he's great and cries out for something a bit grungey. This is something I've not done before but it's not turned out too badly.

I used Distress Inks in Worn Lipstick, Brushed Corduroy and Black Soot, blended along the left side of the card and then used a background texture stamp from Elusive Images inked up with Versafine Onyx Black over the top. I stamped the Stampotique image several times using the Versafine and coloured him in by putting the DI colours onto my craft sheet and using my waterbrush. I cut the images out and mounted them on foam pads. I then coloured the Grungeboard wings with the Brushed Corduroy (which came out very dark but I didn't mind) and the crown with Brilliance Copper. I then used ultra thick EP to emboss the wings but only put 2 coats on because I liked the dimpled surface. The crown I did with two coats of ordinary clear EP. The sentiment stamps are from a set I found in a rummage box at Hobby Horse Crafts earlier this year and to finish off, I cut another image out and inked round the edges of the rectangle for the inside of the card. 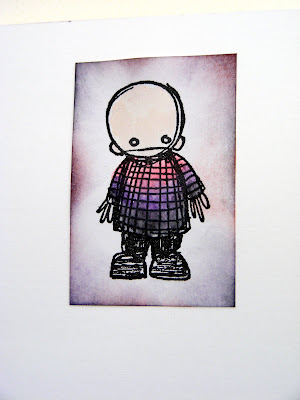 The grungeboard and the DIs came from Once Upon a Stamp.

I hope Jamie likes his card. It has an air of cultivated scruffiness which is exactly his style Lol!

What a great guy card! Love that image.

What nice little boy images! and boy colors too!

Great card Lesley, I love the image and the grungy colours. I always find it difficult making cards for men but you have done a brilliant job. Debbie x

I think you've really captured the feel of this image well, Lesley. Couldn't be much different from your previous posting though. You can really turn your hand to lots of different styles. Love it!

Great card I bet your son will love it.
Maggie

Wow Lesley this is so different from your usual style - but I think you have done a fab job.