A bit of a catch up!

I've got a little out of order with posting various makes because of making cards which I can't share at the time due to the recipient not having received the card and then I forget,lol, so I've a couple of cards from January for you today.

The first one unusually for me has no stamping except for the sentiment and the butterfly. 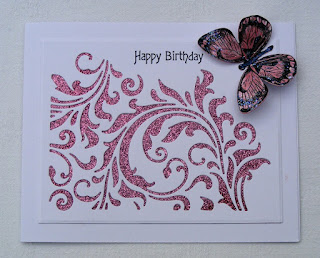 As people who know me are aware, I rarely do anything with glitter and to be honest this is no exception but.......I cheated!  I used one of Tim Holtz lovely dies to cut the flourish for the top layer of this card and underlaid it with some really pretty sticky backed, glittered acetate.  I've had it for years and had forgotten how nice it is to have a gorgeous glitter effect and not one single sparkle where there shouldn't be one! 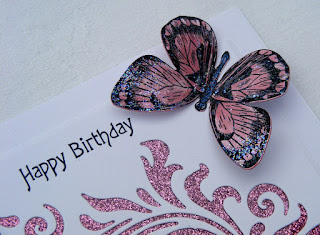 The butterfly is from Tim Holtz stamp set and after colouring it to co-ordinate I covered it with a sparkle pen.  Such a pretty effect and again no mess 😄   I was really pleased with this simple but effective card. 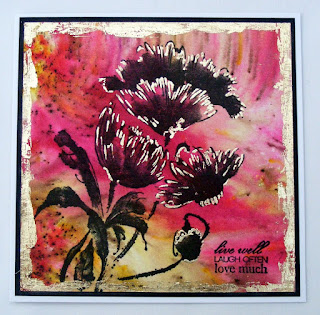 I created the background at an Infusions class last year and used one of the gorgeous Penny Black Brushstrokes stamps over the top.  I'm not sure now if I used black Archival or Versafine. 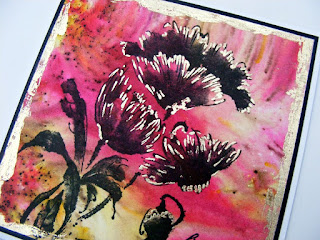 I then added gold foiling to various parts of the image and the edges of the card.  I found it difficult to get a true photo of this card because the light reflecting on the foiling made it much more 'in your face' that in real life I think.

That's all for me today.  I hope those of you at work have a good start to your week and I'll be back soon.

Both cards are great, but the second one is just spectacular! how good to have none messy glittery effects!

Two beautiful but very different cards Lesley, I love them both.

like them both, but the penny black one is gorgeous