And there goes another month!!!

Well, somehow another month has slipped by without any posts from me.  Gosh where is this year going to?  How can it be almost May already?  I have been doing quite a bit of crafting (for me) especially considering I've been away from the craftroom a fair bit this month starting with a lovely two days in London with three wonderful friends and visiting the craft show at Alexandra Palace where lots of lovely new goodies were purchased to fill some of the space I'd made during my craftroom clearout, lol!  I've also been able to spend some precious time with our Son and Daughter's families.....the grandchildren are growing up far too fast for my liking.

Anyway, back to crafting.  I can't share the cards I've made because the birthdays are next week so hopefully that will be two cards to share soon but I also made a couple of tags.  They are totally different from each other but both started out with backgrounds from the old pile of stuff I made years ago.

Here's the first one. 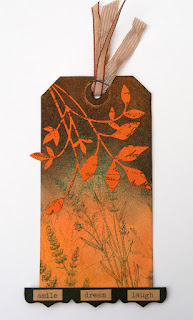 This tag started out with just two shades of Glimmer Mists to which I added the wildflower stamping using stamps from Chocolate Baroque.  I die cut the leafy spray from co-ordinating cardstock and stamped it with script before adding it to the tag. 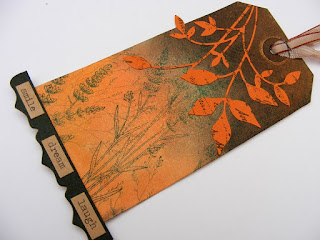 The border along the bottom was a piece left from a long ago project which I painted and then added the Chit Chat sticker words to.

And here's the second tag in a totally different style. 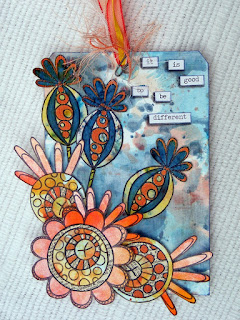 Another ancient background which I think was PaperArtsy Fresco Finish paint mopped up from my craftmat was the base for this tag and the stylised flowers from Tracy Scott for PaperArtsy (one of my purchases from Ally Pally) were stamped onto other background pieces. 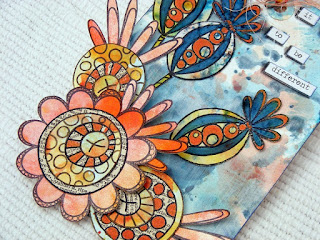 Originally, the background was quite a bit brighter but when I placed the flowers on it they got a little lost so I muted the background a bit with a watery wash of Fresco Finish Snowflake.  I stamped onto  old bookpage and a mix of old backgrounds which I think were done one with Moonglow Inks, another with Brusho powders and a final one which I think was another Moonglow test piece and I added some watered down Viva Precious Metal paint to co-ordinate it a bit more.  I painted in some areas with the Precious Metal Coral and the blue was from an really old set of ink nolonger available.  I did my usual cutting and layering to build up the flowers and then attached them to the tag.  I finished it off with Chit Chat sticker words again.

I am getting an awful lot of satisfaction using up the old backgrounds I found and figuring out what I can do to them to make them co-ordinate.  I was particularly pleased with the second one because it's quite funky compared to my usual style and I really enjoyed using Tracy's stamps.  I'm hoping to treat myself to at least one more set when I get to visit the PaperArtsy stand again at the StampMagic show at Doncaster Dome in June.

Righty Ho!  That's it for today but hopefully I'll be back next week with the two cards once they have been opened by the recipients.

Thanks for dropping by and have a wonderful long Bank Holiday weekend everyone here in the UK.  Lets hope it gets a tad warmer than it's been here today.