Over on the PaperArtsy Blog at the moment they are just going into the second week of their current challenge theme which is 'Circles' (see Leandra's intro post from last Sunday HERE) and as always there has been some absolutely fabulous inspiration from the various designers.  I've been itching to join in especially when I saw the gorgeous cards from Jo Firth-Young on last night's post so this afternoon I went through my stash of PaperArtsy stamps and pulled out several sets with promising images.  However, I went off on a complete tangent for this entry and only used one tiny stamp ..... for a sentiment, lol! 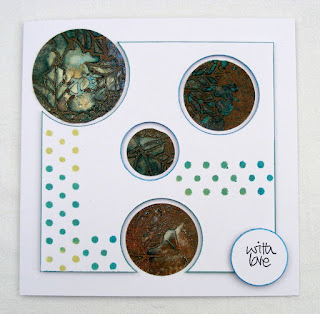 For the previous PaperArtsy challenge to use gels/mediums lots of us fell in love with Lin Brown's fabulous faux paua shell technique (see my entry to that challenge & link to Lin's video HERE) and one result of my play was a piece of crackly tissue.  It was actually my favourite result but I decided I wanted to use it on this card and very bravely (I think) punched various sized circles out of all of it.  I have enough circles to make 2 more similar cards and as you can see I only used the one sentiment stamp from a JoFY set. 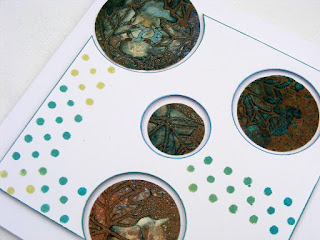 I'm sorry I forgot to take photos of each step.  I cut a square card base and a smaller square of card which would leave a 1 cm border.  I found my Nestie circles were exactly the right size to leave a border round my punched circles.....very handy..... so I decided where I wanted them to go and diecut the circles from the top square.  I used a stencil and a mix of Guacamole and South Pacific Fresco Finish paints together with some Fresco Metallic Glaze to stencil the little circles. 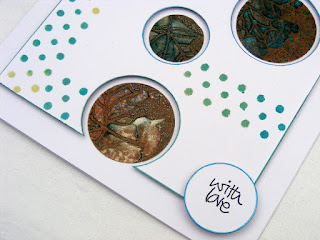 I used two co-ordinating metallic chisel tipped markers to edge the circles and the outer edge of the topper and then mounted it onto the card base with 3D foam.  I then glued the punched circles into the holes and used the smallest diecut circle to stamp the sentiment onto before adhering it with 3D foam.  This was a happy accident because initially I was going to stamp the sentiment directly onto the topper but forgot all about it until after I'd stuck it to the card base.  I was then worried in case I messed up the stamping (and ruined the whole card) as the 3D foam underneath meant I nolonger had a stable surface to stamp onto.  Thanks Sam for suggesting stamping on a bit of card!  I actually think it balances the design better than my original idea ;D! 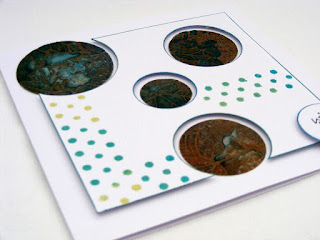 This shows the dimension of the 3D layering.

Well, I have 10 birthday cards to make for September so this is one off the list ;-).  I'm off to link up to PaperArtsy then crack on with another card.  See you soon.

Wow! Stunning card, Lesley! Gorgeous circles! I really want to try that technique, but not sure I will fit it in before half term now!

Stunning Lesley, I can see that I shall need to go take a look at this interesting looking technique.

Beautiful, so clean and fresh x

Your shell circles are completely stunning, Lesley - and I love how you've showcased them here… glorious!
Alison xx

I too fell in love with the Paua and used it on my entry! I'm in good company... Love the CAS feel of your card, it helps showing off the scrumptious Paua circles.