Last week I had to post something to my friend Elaine so I made a tag to put in the envelope.

I didn't start out to use Autumn colours again but somehow ended up there.  Never mind, I love them and I know Elaine does too.  The stamps I used were PaperArtsy Hot Picks that I bought at the Artisan Show (fab show) at the beginning of the month.  I really enjoyed making this tag just for the fun of it and especially as it was for a lovely friend who I sadly don't get to see very often. 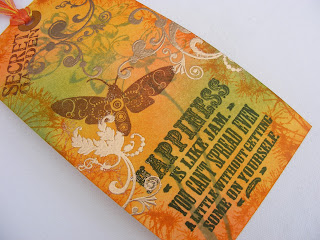 I used mainly Distress Inks for both the blending and  stamping and was amazed at how long they took to dry.  As I wanted to use Versamark and Gold EP for my final stamped images I took the precaution of spending quite a while drying the tag with my heat gun and then left it for at least another 30 minutes before applying the EP but ............................ it still stuck to the DI's!  I brushed as much off as possible with a fine paintbrush but I think next time I'll leave it overnight, Lol!

And now ............................ I have something to share which I think is quite special., proud Mum or what, Lol!  My Son, Jamie hasn't had time to post anything on his own blog for quite a while (new job taken over) and last week he 'invaded' my craft room to make a card for his wife's birthday.  The card itself is really simple using a lovely Hampton Arts rose image (which has special meaning as I used it on their wedding stationery) and a Ranger Coffee Archival inkpad.  The sentiment is from the Elusive Images Birthday Words plate but what I think is so special is the rose cut out that Jamie drew himself and cut out by hand from some pearlescent paper I gave him.  There is one overlaid on the front and another on the inside of the card and I am still in awe everytime I look at them.  They are so beautifully cut out and so intricate they look laser cut.  See what you think............... 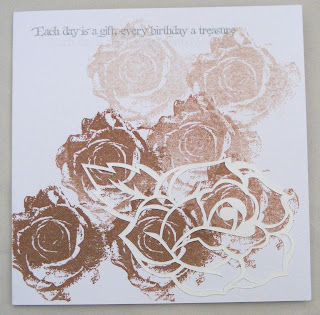 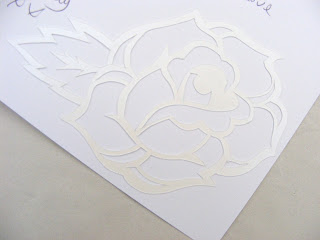 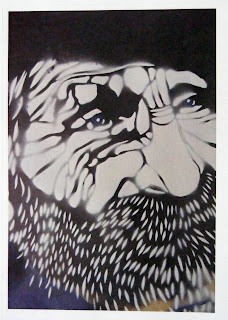 This is a photo of an ordinary office sticky label which in turn is a printout of a photo of a quite large canvas.  Does any of that make sense?!?  But the amazing thing to me is that Jamie drew the image, cut out the stencil with a scalpel, placed it over the canvas (which I haven't seen yet) and then I think he used spray paints through the stencil to achieve the finished image.  It's mostly black with just touches of blue and yellow along the bottom and you can just see a hint of blue for his eyes.  I still can't get over how perfect the cutting out is!
Am I proud or what!

Have a lovely day all!

Wow the talent runs in the family. I love your tag and share your dismay at the Distress inks picking up the EP it's pain. Your son's talent is a delight, I hope he has some more time to play:0)xx

Hi Lesley,
Your tag is beautiful! I didn't go to the Artisan show this year, I went to another show the weekend after instead but it wasn't as good as Artisan(in my opinion).
Your son is extremely talented - I can guess where he gets that from!
Clare x

Jamie's work is brilliant Lesley! As a parent, you are proud of your children anyway, but to produce something stunning like these pieces, I know how that must make you feel. He is a whizz cutting out, he could give all of us a run for our money!
The tag is lovely, beautiful colours, they are really warm. I'm sure Elaine was pleased to find it in her parcel. As you say the inks take an age to dry if you want to emboss afterwards. It looks fab anyway, Judith xx

Love the tag and I'm sure Elaine will too. The cutting out is awesome - wish I had a steady hand for cutting out like that I'm not sure I should even be allowed near a scalpel!!

Hi Lesley. That tag is just stunning. I love everything about it and have studied it in great detail with the vian hope that I can attempt something a fraction as good.
Your talent certainly runs in the family. What a beautiful card your Son made, but the fact that he actually bothered to go to the trouble of handmaking one is fantastic. Not many men would do this for their wives!!
Hugs Lisax

I see your creativity gene has passed to your son too...very talented.
Love the tag...the stamping and colouring are top notch.

Funny how we often end up using colorus not intended, I do that a lot especially with Autumnal ones.

the tag is gorgeous Lesley, and I love that quote! Jamie has done a great job on that card, you obviously don't need a cricut if he's around, the cutting is brilliant

A gorgeous tag - I just love the sentiment. Oh boy - you must be so proud of Jamie - not only is he very talented he's so caring to make this card himself. I sure his wife loved it.
Loving the blue fairy card too.
Beryl xx

Firstly your wonderful tag .. .. love those colours and all the elements you have managed to incorporate onto such a small area. Beautiful.

Then there is your Son's work. That is wonderful too .. .. I cannot even imagine how long it must have taken to make such an intricate stencil.

The birthday card is so very special .. .. your DIL must have been so happy to have received it (or has she yet?).

You have every right to be proud.

Jamie obviously takes after you, both your work is wonderful! He must have patience in equal part to talent I reckon.
I really enjoyed the Artisan show too and it was great to bump into you there at the end!
Chris F

Lesley
Love the tag - that sentiment is really fun.

What a stunning card your son has produced. A truly talented young man.

The tag is beautiful! Love it! The art from your son is fantastic!

Jeez, I hope he knows how cool that is.
A

Wow Lesley, no wonder you are proud. Jamie's creations are fabulous!.

Great tag Lesley and a lovely sentiment, Elaine will treasure it. Jamie is one talented male. The rose card is superb and the cutout something else. He obviously has great spacial awareness and a huge talent!

You have every right to be proud Lesley, treasure that feeling you are so very lucky! Amazing work and do I believe that Jamie cut that by hand???? I'm stunned
x Michelle