My Mum's Birthday Card and a Doggy Trauma

My Mum is 81 years old next Sunday and I have to say I hope if I get to her age I'll be in the same sprightly condition. Somehow, I doubt it because she puts me to shame now sometimes, Lol.
Anyway, this is the card I've made for her and it's safe to post as she doesn't even have access to a computer let alone own one. She does delight in sending me text messages though, in text speak I might add, from her mobile phone. 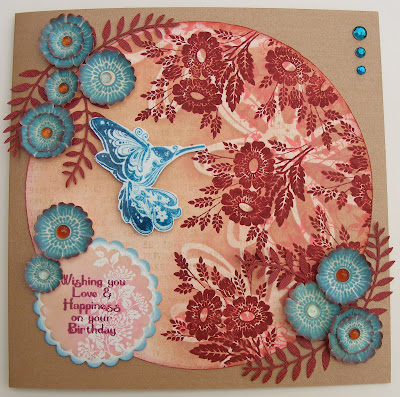 Originally, this started out as an A4 card and I used my new Mega Circle masks by Heidi Swapp. I had just finished all the blending, flower masking and stamping and then ....................... I dropped a blooming DI inkpad onto it. The air was somewhat blue, I have to admit. The only lucky part was that I didn't drop the inkpad onto the actual masked circle so I decided to cut it out and mount it onto another card rather than waste all that work. As you can probably see from the detail close ups, I blended DIs onto the background first then used a HS daisy mask and blended some more, removed the mask and did a couple of layers of stamping using stamps from the EI DL sized Lily themeplate and the Fantasy Floral A4 themeplate. Then after cutting the circle out I distressed the edge a little and then inked lightly all the way round. I then used a complete contrast DI in Broken China to stamp the humming bird by Inkadinkado which I versamarked all over, clear embossed and cut out. Using the same contrast ink I stamped quite a few flowers in two sizes again from the Fantasy Floral themeplate, cut them out, curled the petals a little, layered arranged them onto my card before fixing with silicone glue. The pretty circle block is from EI again and is one of their newest plates called Damask Blocks along with the sentiment from their very useful new Birthday Words plate. I cut this out using my scalloped circle Nestabilities. I also punched some leaf fronds from Core-dinations card using my Evergreen punch by Floral Punch Craft from The Hobbyhouse. 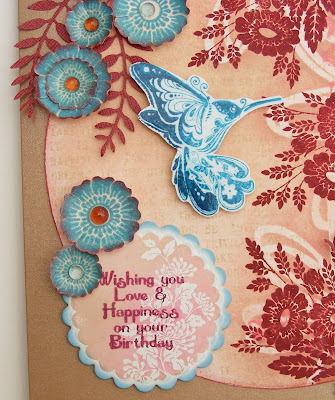 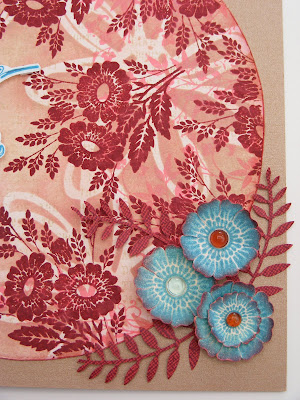 Almost everything I used for this card can be purchased from Graphicus/Elusive Images, my favourite craft shop as everyone knows.
Before I finish this post I'd just like to share a little bit about the rather traumatic week we've had with our little Snoopy. On Monday evening Snoopy thought he could have a little chomp on a nice fat bumble bee and live to tell the tale. Within seconds his face started to swell and before long he looked more like a Bassett Hound than the Jack Russell/Dachsund cross that he is. The swelling was so bad we got rather worried that it might affect his airways so felt that a call to the vet was in order. Result - a quick OUT OF HOURS visit for a steroid injection to halt the swelling at a cost of £62! Well, at least it seemed to do the trick and although it took a while for the swelling to come down, by Tuesday evening we thought he was fine. Uh Oh! Thought wrong! In the wee small hours of Wednesday (3 am to be precise) we were woken by Snoopy's panicked barking because he wanted to be let out. We thought that he'd settle after that but we were wrong again. 45 minutes later he started again and when I went to him this time he had been sick (too much info I know). I spent the rest of the night on the settee having 10 minute naps then being roused by a very poorly little dog being ill.
I have never known our little bundle of energy be so still and so quiet for over 24 hours. It's taken him most of today to get back to anything like his normal self and, of course, as he has spent the greater part of the last 36 hours sleeping he has just started to wake up - and it's nearly my bedtime and I haven't caught up on the sleep I lost yet. Whether it was the poison from the bee sting (after all, he is only small) or something else entirely that made him so sick I don't know but I hope it doesn't happen again.
The first of the photos is to show what he normally looks like and the others are taken about an hour or so after the sting. 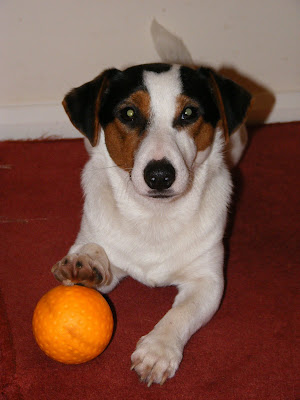 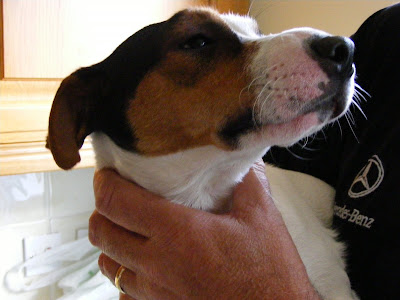 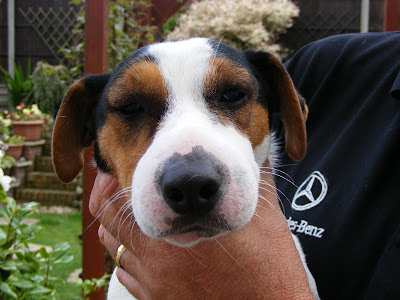 Hopefully after another night's sleep he and I will both be fully recovered in time to enjoy the weekend - I hope!
Night Night! Sleep tight!
Posted by craftimamma at 22:02

Oh, bless him! I have every sympathy. I don't get on with bees either! I hope you catch up on lost sleep and that snoopy makes a full recovery very soon. Your card is absolutely gorgeous! Such a lot of work, but stunning! I am sure your Mum will treasure it.

Dear Lesley, I occasionally landed on your blog and like what I see here. You do wonderful artwork! And so I will make a visit again on your place from time to time to see what's new.
Love from Switzerland,
Karina

Ooh poor Snoopy...I hope he is feeling better now...give him a cuddle from me!
Your card is beautiful Lesley...such an original design and layout and the colours are gorgeous...your mum will tresure this! Debbie x

Your card is absolutely stunning, Lesley. I have read and re-read how you did it and taken in all the fantastic detail. Those elusive images stamps are wonderful aren't they!
Your poor doggy. Animals love chasing bees and you can't tell them how daft it is. I'm glad to hear he's recovering. Hope you have caught up on sleep too now.
Have a relaxing weekend.

Stunning card, Lesley, really beautiful. I'm sure your mum will love it. Hope your little dog is better now.

Oh Lesley, poor Snoopy, do hope he's on the mend. Takes me back years to whe something similar happended to one of the labs we had then,very frightening. But they will do these thigs,

George one of the labs we have now is 7 months old, he's had two really hard blasts from electric fencing and still went back again, hopefully learnt now. We have horses you see and actually decided tis trype was best as wooden fencing looks good, but tghere's no deterent to stop the dogs going under adn doesn't bear thinking about what would happen if Heskey (the biggest horse but young horse) had a dog round his feet (one of two of the hens met thheir demise that way).

Anyway, on to your card for Mum. It's beautiful, she will adore it. I used to love doing a special one for my Mum and Dad,knowing how it would be loved, sadly I lost both recently.

Have a good weekend.

I hope you are all back to normal now and you have caught up on your sleep.

Your card for your Mum is beautiful.

Great colourway and lovely sentiment. I am sure your Mum will treasure it.

Have a great time with Mum and enjoy your weekend.

Hi Lesley, Boy am I glad I got back in time to see this fantastic card. I just love e3verything about it. The design, the colours and all the embellishments. You have one lucky mum in more ways than one. I'm so sorry to hear about your little dog's trauma. I do hope he recovers fully and learns his lesson - although it's hard to know if he would actually put two and two together.
Give him a big hug from me.
Beryl xx

Christine (All She Crafts) said...

P.S. Thanks for the visit and comments. :o)

Lesley I hope your little snoopy is doing better and makes a full and fast recovery.. He is so precious.
Hugs, Christina

Love the card Leley, colours are great. I have the bird stamp, but haven't used it yet! That set is gorgeous isn't it? Please pop over to my blog, there's something there for you. Thank you for your kind comment over the weekend, Judith x

Hi Lesley,
Glad to have the chance to see this fantastic piece again. I really am in awe of the way you've built this up.
Hope Snoopy is OK now.
The piece across the middle of the Tilda card is a strip of pink pearl paper punched down each side with a Martha Stewart punch. I then stuck some sticky ribbon (from a set from C & C yonks ago) down the length of it.Hope this helps.
Beryl xx

This is a STUNNING card !!!
isa

Poor little guy! I love your card. The colors, design, and the whole card is just so wonderful!

What a beautiful card!
I love the colour-combo you have used,so fresh!
And hope you`re sweet little dog is feeling better :)
Hugs from Maya:)

the card is so cute. I bet you used an a4 card for it.