More of the BLOOMING WHITE STUFF

Happy Sunday morning everyone. Couldn't resist a few photos of what we woke up to this morning!

When I went to bed about 1.45 am we had an extremely heavy frost but when I got up 6 hours later this was the scene from our bedroom window. 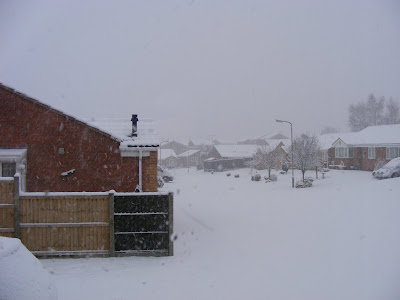 and from the kitchen door 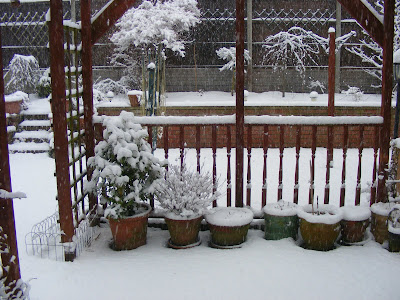 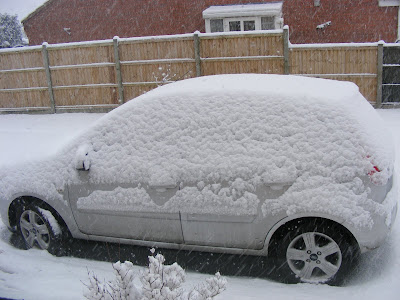 At 9.15 this was Hubby coming back from fetching his newspapers with our little Snoopy. Snoopy loves the snow and he's skitting about in front of John's feet waiting for the snow to be kicked in the air for him to jump and catch. He tired himself out and is now curled up on his cushion fast asleep, Lol! 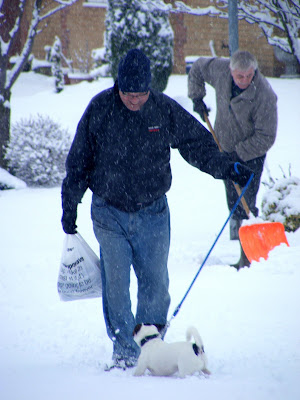 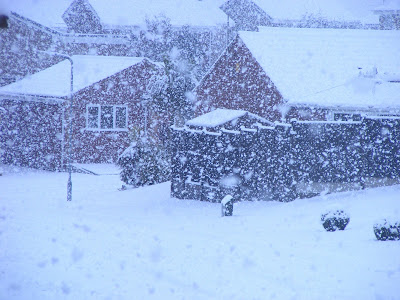 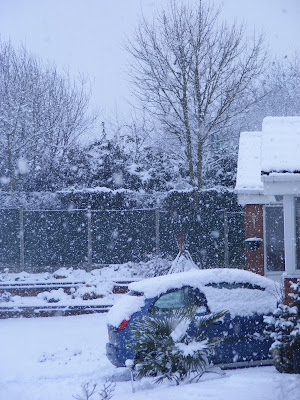 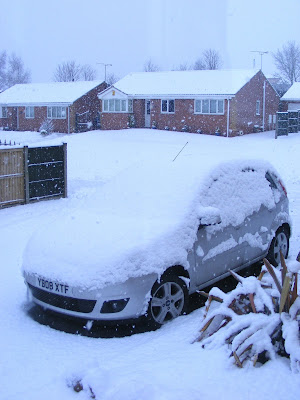 Thank goodness, it has now stopped and appears to be thawing. Like most people I've had enough of it's prettiness for this year but I've just been watching pictures of the awful floods in Madeira so I've made a decision to look at with a child's eyes and get out there and help John clear the drive!

I hope you're all keeping warm and dry today.

It does look lovely,but I am glad we don't have more ourselves, we have just had lots of rain. I think we all need spring now. Keep warm and hopefully you can enjoy some studio play time today!

It looks very pretty, but I will get a bit stressed if I have to drive the car in it. I waited until the last lot of snow had gone before I went and bought it. Thank goodness it didn't come yesterday when I was trying to find my way through Sheffield! Stay warm, Lesley and don't shovel too much!

Same here, Lesley. It's thawing now, but I haven't ventured outside!

How about this for something strange - the security word I had to type in to make this post was "sunthen" ! Let's hope it's right. I'm thoroughly fed up with being cold! x

Looks familar Lesley, we have the same here in Yorkshire. We were absolutely amazed to see it this morning. Been out for a play but now keeping nice and warm!
Let's hope this is the last fling before Spring.

Looks like you had the same as us, it was coming down the size of gold balls at one stage. The suns shining now, but oh so cold again.

Hi Lesley. Gorgeous photos! and your Snoopy's soooo cute :) We had a bit of snow overnight, but not as much as you,and its thawing now. I've left you a little something on my blog.
Hugs, Rachel xx

Hi Lesley, Birmingham was also white over when we woke up! Since then we have had some lovely winter sunshine and virtually all the snow has melted. Keep warm, Jo X

Lol, I swear you guys are having more than us this year ! (except that with us it never melts "in between". It's all white from December to march...
hugs,
isax

Hi Lesley
Yes it does look gorgeous, but I agree with you - it does get beyond that, and you want everything back to normality.
Hugs
Valx

Wow Lesley! I cannot believe you are still getting that much snow over there, this must be a record year! keep warm,stay inside and make more of your wonderful creations is my advice!!

wow.. you had the same effect as we did with all that snow.