Sorry, I've got to be very English here and mention the weather because it's glorious this morning where I am.  Beautiful blue sky with whispy clouds and bright sunshine.  At the moment the temperature is just right but it doesn't bode well for my craftroom later, lol!  I may have to brave the heat though as I've been away for a few days looking after little Izzy before nursery reopens next week and I'm getting withdrawal symptoms!  On Thursday I took Izzy to Newby Hall in North Yorks and we had a really fun filled day.  I haven't been in the hall but the gardens are lovely and there's a really great adventure garden for kids (which is where we spent most of the day, lol).  Izzy isn't four until December but she is such a daredevil and she spent the day making me a nervous wreck watching her daring exploits.  My Daughter said I would have been okay to sit and watch her from one of the many seats but as her Mamma I felt I had to be 'right there' to catch her if she fell, Ha! Ha!  I don't know who was the most exhausted at the end of the day but we did have a good time and I would recommend Newby Hall as a lovely family day out with something for all ages.  Oh yes, there's a really good restaurant too where I tried their very nice Beetroot and Spicy Parsnip Soup ....... delicious!

Anyway, on to the crafting now.  Finally, I have something I can show you on my own blog.  Everything I've made for quite a while has been DT stuff that I can't blog on here, at least not yet.  However, my card today was made for my lovely friend Jo's birthday a few weeks ago and I couldn't show that until now because I used some lovely new Chocolate Baroque (formerly Elusive Images) stamps which have only been released this week.  There are two new A5 stamp sets called Music Fanfare and The Art of Chess and if you check out the DT blog (link in my sidebar) you will see lots of inspiration from the Design Team.  Please scroll down over the last few days as Glenda has been publishing our draft posts since the middle of the week and she kicked the launch off with a look at the two stamp sets, some inspiration from the Queen of Stamping herself and a hint that there might be a random give away.  I would guess that means the more comments you leave on the DT blog and the teams individual blogs the more chances you have! 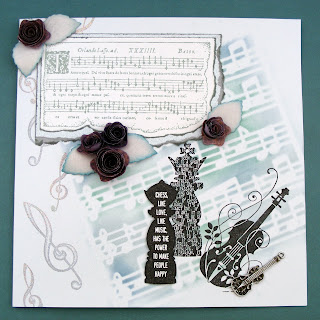 The colours I used for Jo's card were rather delicate shades of Versamagic ink blended over a lovely Tando Creative music score mask (mask available from Snazzys).  All the stamped images are from the two new Chocolate Baroque sets and the flowers and leaves were left over from the decorated initial I did for the Snazzy DT launch which fitted in with my colours perfectly.  The little violin charm (from IndigoBlu) was originally an antiqued brass colour so I rubbed some silver Inca Gold into it. 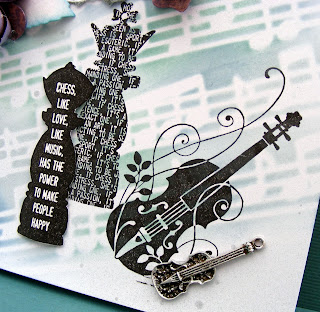 I always forget to mention that most of my photos are clickable, once to zoom and again to get a real 'in your face' closeup, lol!  I always like to look at closeups on other people's creations to get a better idea of the texture and dimension.  It's the next best thing to actually touching them I think. 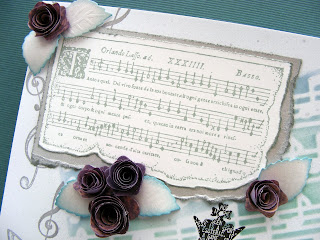 Don't forget to hop over to the Chocolate Baroque DT blog as there are some beautiful creations to see.

Have a lovely weekend everyone and thanks for sparing time to visit.

PS   I thought it was time I gave a bit of explanation for my lack of posting in recent months and lack of commenting on my favourite blogs to some extent too (I do drop by them often though).  Unfortunately we have had a few family trials and tribulations which are likely to be ongoing for quite sometime and these are also the reason I haven't managed to do the blog post I intended on Jenna and Tony's Wedding.  Around the time of the wedding I had set in motion an assessment of my 83 year old Mum and what we suspected has been confirmed, she has Alzheimers and we are now waiting for an ECG next week to see if she is able to have the drugs which will hopefully slow down the effects of this awful disease.  It will be October before she sees the consultant to get the prescription though so that's another month for the deterioration to progress.  The other event which  as a Mum and doting Mamma is occupying much of my time and thoughts is that our lovely Son's marriage has ended.  I know it happens all the time and is not the end of the world, it happened to me over 40 years ago but thankfully, I had no children at that time and could quickly move on with my life.  Jamie has a little girl (as my regular visitors will know) who he adores and the effect this is having on both of them is the really upsetting (to put it mildly) part.  Anyway,  that's the situation put very simplistically and I'm trying hard to recover my normal rather leisurely rhythm, lol!  I'll be back a bit quicker next time I hope but in the meantime thanks for bearing with me.  Lots of love Lesley  Xx
Posted by craftimamma at 10:52

Hi Lesley, what a beautiful card and lovely cool colours, like that ice blue and black together! Have a nice weekend, greetz Mirandax

A fabulous blend of stamps and that mask Lesley. Those colours are lovely, creating a soft feel to the whole piece.
Life never seems to get easier does it? Hang in there my friend, we are right behind you, big hugs, Judith xx

What a lovely card made with these super new stamps and I'm sure your friend loved it. I look forward to seeing more of your secret DT work as we go along.
Take care and be sure to make time for yourself

love the beautiful subtle colouring of Jo's card.
Big hugs to you xx

I am really sorry to hear of the family issues you have - it must be a strain on your all, and particularly heart-wrenching for your son that he cannot see Alexa.

Take care, and ensure you have some 'me' time as well.

A stunning card Lesley, such cool, pale colours, and set off just right with those lovely dark roses.

I hope life starts improving for you soon.

lovely card Lesley - like the way you combined the stamps.
So sorry to hear of your family troubles, do hope Jamie manages to keep contact with Alexa, and that your Mum doesn't get toomuch worse before she sees the specialist- do look after yourself, sounds like you need some of Glenda's fairy dust too!
big hugsxxxx

A truly beautiful card, Lesley. You have been in my thoughts over the past few weeks. I'm sorry I've not been in touch, but we too have had a few issues. I'll drop you an email when I get the chance.
Big hugs

Hi Lesley,
I'm really sorry that you have been having such a rough time (boy do I know that too this year), so I want to send you a gazillion hugs.
Your card is really lovely. Love the subtle shades.
Hugs,
Isa

A beautiful card in my favourite shades, love the chess pieces too!Hang on in there - my Mum developed dementia over the last few years and finally had to go into a nursing home last Summer. Although fraught, and a tough decision at the time it has turned out to be the very best thing for her and she is extremely well looked after. xx

Hi Lesley
First things first, it's so lovely to catch up with you again and thank you so much for your generous comments,especially in view of all the things you have going on at the minute. My thoughts are with you and your family.
I'm glad you were able to have some relaxation with your Grand daughter, Newby Hall is one of our favourite places too, although we haven't been this year.
Your card is truly beautiful, I love the soft colours with the touch of dark drama.
Take care my friend.
Hugs Lisax

Firstly, I love the creation you have posted.

Such beautiful elements put together perfectly as always!! I love the chess pieces and the torn music script corner very much!!!

We have already shared all the trials and tribulations that surrounds you at the moment and you know I am thinking of you. I just hope that your Mum gets the medication that she needs and that your Son is coping as well as he can.

Just coping with one of these events is stress enough for you but having to cope with both .. .. well my heart goes out to you. Good job you are made of tough stuff!!!

Beautiful card hun... sorry to hear that you have had a bad time... big hugs... hoping I am cheering you up by telling you... your name was drawn to win the card and Watermark pad over on my blog from last Saturday's post... please can you let me have your addy so I can pop them into the post for you? ;O))

Beautiful project. Love the details. The instruments are very fun and cool! So sorry about all the difficulties you are going through. Sending thoughts and prayers your way!