......................... Christmas!!!!  and the blooming temperature thinks it still is 'cos it's perishing cold, lol.  On my last post (ages ago I know) I mentioned that I was still waiting for one of my buddies to receive the Christmas card I had sent to her and which I had also sent to my 3 lovely CSQ friends.  Well, unfortunately it looks like it has been swallowed by our Royal Mail's big black hole so I'm going to post the picture now albeit really belatedly.  At least Sue will be able to see what she should have received.  You never know it could turn up in years to come as these things have occasionally been known to do, Lol! 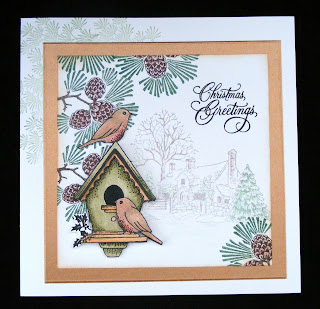 All the stamps I used on the above card, except for the greeting, are Elusive Images, some from this year and the snowy cottage scene in the background from a previous year.  The greeting is a Clarity Stamp. 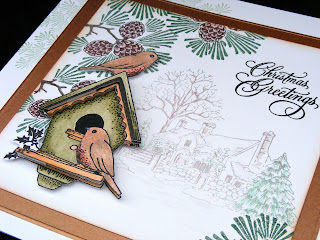 I am sorry I've been awol again but  I have been quite busy on the crafting front just not with things I can show yet.  Some has been DT stuff but a lot has been Wedding things for our daughter, Jenna, which I can't show yet either, mainly because everything is still in bits, lol!

Jenna and Tony have decided on an informal theme for the wedding of an English Summer Garden Party so there are to be no formal flower arrangements on the tables.  Instead we have collected some really pretty jugs, vases and even teapots to hold cottage garden type bunches of flowers.  We've also been collecting different sized jars which I'm going to decorate with ribbons and paper lace borders and these will have tealights in and the place name cards won't be cards at all but I'll show you all the different things nearer the wedding which is towards the end of May.  Coming up with designs that Jenna liked proved to be a bit stressful because she changed her mind a few times (easy to do when it's your Mum you're getting to do the making), lol, but to be fair I also found it a bit difficult to get my head around what she wanted.  Everything she tried to describe sounded such a mish mash to me I thought it was going to look totally unco-ordinated.  The lightbulb lit up when we went to a Vintage Wedding Fayre at a hotel in Harrogate and she started pointing things out to me ..........  then I finally GOT IT!!!!! ..... and I think it's going to look lovely .......... if I can do her ideas justice, ahem!  I'm now knee deep in pretty little rosettes (thank goodness for Mr Holtz and his rosette die) and before too long bunting will be on the agenda too.  We are hiring quite a few metres of bunting but the wedding venue is quite a large room and has a very high ceiling so we are going to supplement the bunting with some of our own.  I'll let you know how I'm getting on with things as I progress but this is a pic of some of the things I'm using. 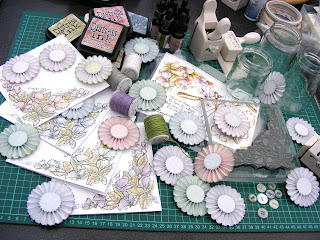 Finally, for this post, something not so happy.  Immediately after the New Year, my Hubby and I had to attend a funeral so I had to make a sympathy card.  I fell back on my favourite technique of last year which I had used for my quick Christmas cards.  I said it was a useful technique you could use for absolutely any occasion by changing the colours and the stamps used and it is. 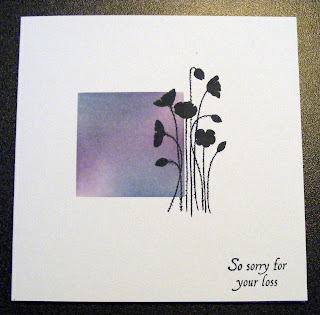 The stamp I used is a Lavinia one and the Distress Inks were Milled Lavendar, Dusty Concord and I think Stormy Sky. 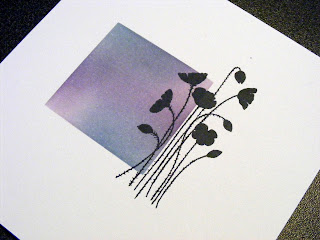 Well, that's it for me today.  Hope you like my makes and I'll do my best not to take so long to my next post.
I really appreciate your visits and especially if you have time to leave a comment.  Stay well everyone.

PS   Don't forget you can click the pictures for a larger image and then you can see the subtle sparkle on the Christmas card.
Posted by craftimamma at 13:49

I was the proud recipient of one of those gorgeous Christmas cards. It is truly beautiful.
Your wedding makes look so pretty Lesley, I love the colours that you are going with, you will do Jenna proud.
Those one layer cards look deceptively simple, but they take a steady hand, and good blending. It's a lovely example. I love the colours that you have chosen, Judith xx

Beautiful cards Lesley. Shame about the Royal Mail - time they got their act together. Love the Sympathy card - hits just the right note.

Well, the wedding plans sound very exciting! I like the idea of the cottage garden theme, I'm sure it will be very pretty. Can't wait to see the photos!

Your cards are lovely. The snowy cottage background of the Christmas card is very effective. The sympathy card is spot on, simply beautiful.

Hope to see you soon. xx

I never thought of using that technique for a sympathy card. It works wonderfully.

I can't wait to see the photos of Jenna's wedding. I bet the hall will look amazing and of course you'll do here ideas justice!!

Those are both lovely cards and I'm sure people appreciate a personal touch when it comes to the sadder occasions. I read in the paper today that someone has just received a Christmas card posted five years ago so keep your fingers crossed!!

love the way you combined stamps for the Christmas card , really clever - hope it does surface from the black hole! Your sympathy card works really well, I must have a go at that sometime
good luck with the wedding preparations!

Wow, Lesley! Now I can see how busy you have been. The Christmas card was so beautiful and I love the pastel colours of your wedding cards. The sympathy card is beautiful too.

I love that Christmas card Lesley - its inspired and I'm now trying to remember where you showed it us before - guild or CSQ - or have I dreamed about it?

That sympathy card also works brilliantly. I first saw this on your shared blog and 'stole it' from there.

What a huge job you have on your hands for the wedding - I look forward to seeing more of this.

Last but not least... I'm wondering if your other makes are for some design team makes. We'll just have to wait and see.

Oohh Lesley, how lovely! I love the idea of jugs n teapots and bunches of flowers and the bits you are making lokk perfect for the country garden shabby vintage chic look that seems to be the idea. Cant wait to see photo's. I'm so glad it's not me though! I was totally bushed after the months of preparation.
EnjoY!
x Michelle

Gorgeous card! Love the design it is fabulous! Thank you for sharing so I can appreciate all the work that went into that beautiful card. Love the bits and pieces you shared for your daughters wedding as well! The sympathy card is perfect and so sorry that you had a use for it.

Loving the cards you have posted .. .. apart from the reason for needing to make the last one!!

That looks a great technique .. might have to have a go.

As for the wedding preparations. They sound wonderful and look like they are coming along perfectly.

It can be difficult to picture what someone else is describing .. .. they see a mental picture in their head .. . but it isn't easy to plant that same image into someone else's head. Thank goodness Jenna was able to "show" you.

Have a lovely weekend Lesley.

Grrr. I'mhaving a hissy fit. Just when I thought I'd do some badly needed catching up - the internet is either freezing or not showing half the images - or kicking me off completely - so - I can see the Christmas card that went missing - such a pity as it's fabulous - and the sympathy card - which is very tasteful and I'm sure was appreciated. I'm now officially giving up for the day and off to cook the dinner. Rant over.
Have a lovely weekend and don't work too hard on all that wedding preparation.
Beryl xx

I do love this card. Sympathy cards can be so difficult, but this is just right. I saw the others on the Craft Stamper challenge blog and loved all of those too. I gave up on Craft Stamper when they stopped the ATC swap, and I was a bit miffed that they wouldn't send the subscription gift to overseas customers (I would happily have paid the postage), but I do miss my monthly read. There's nothing to compare with it out here, so I may have to re-subscribe this year.
Thanks for following my new blog. I am only just beginning to connect user names with actual names, but I'll sort you all out in the end!

Thank you so much for all your comments on my blog - they mean so much to me.

I love the Christmas card - traditional but so different. The sympathy card really strikes the right note - so little can mean such a lot at this sort of time.

Good luck with all the wedding stuff - I really look forward to seeing what you do - I just know it will be spectacular.