Well, here we are again and my second WOYWW. It doesn't really look as though much has changed since last Wednesday but I was away for a couple of days at my daughter's and going to a fab workshop at Graphicus. Since coming back I finished the card that was on my desk last week and two of the articulated tags I made at the workshop and today I finished off a lovely little wall hanging that I made at a workshop with the lovely Linda Elbourne (another WOYWWer). I'm going to post the tags and the hanging over the weekend but I've added pics of the card from last week to this post. 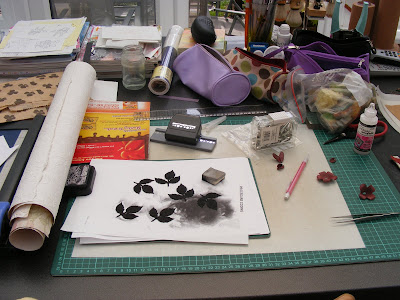 Centre stage on my desk you can see the rose leaves that I was sponging with Black Soot DI and the final red rose I was making for my Linda E wall hanging. I missed the actual hanging off the photo and you can just see the teeniest corner on the right edge. I promise to blog it over the weekend though. 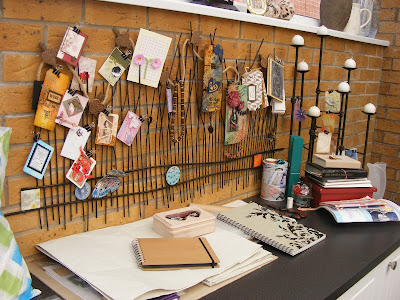 This week I decided to show you a pic of one end of my long worktop. You can see my metal wall decoration which I bought to hang all my bits and pieces I've received from other crafters plus some of my own creations. I do rotate them regularly though because they fade so quickly from the intense sunlight in my craftroom/conservatory. The pieces of Stampbord at the bottom are mine and the two tags I finished this week are towards the right plus a few other things. I had a lovely couple of hours yesterday rummaging at a local charity shop where I got the pretty little jewellery box and the Papermania spiral bound book (which was still in it's packaging) and some other stuff I'll show next week from TKMaxx. The Papermania has lovely strong covers and thick black card pages which I hope to decorate at some point. The other book I bought to make a sort of stock list in because the one I'm using at the moment is full to overflowing and getting in a bit of a jumble. If I don't take 'my crafting bible' with me when I shop for stash, I end up doubling up on inkpads, paints, etc., Lol! There is another work in progress under the paper. I cover most stuff when I'm not working on it because of the sunlight and heat. Last week's thermometre reading was nothing compared to yesterday afternoon's - 50 degrees centigrade because I had been out for about 4 hours and so had to lock the doors and windows. It really was like an oven.

One or two people mentioned in their comments last week that they hadn't thought of the heat damaging their stamps so I thought I'd just mention for anyone that doesn't know, it's not the heat that's the problem apparently because the stamps are made under extremely high temperatures but it's the UV rays that damage the rubber (and the polymer ones too). I think it makes them brittle but I'm not going to leave them out to find out. 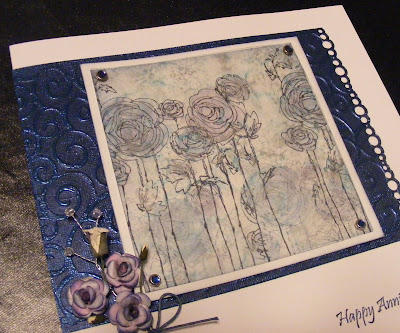 Finally, this is the card I was working on last Wednesday. The image is a Stampendous cling stamp which I watercoloured with Distress Inks and then covered with a piece of acetate that I'd coloured with alcohol inks. The piece of embossed cardstock I touched lightly with Versamark and embossed with Moonglow EP. I made the little roses from designer paper and inked the edges. I used the dark blue and kept to blue tones because it was for a 45th Anniversary which is Sapphire. 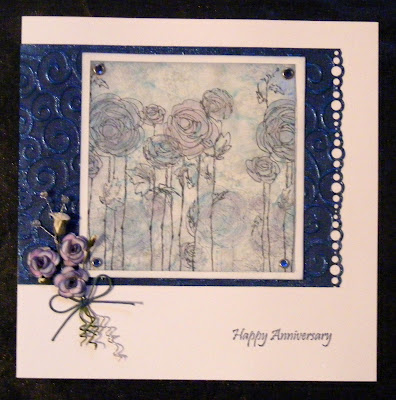 Next week, I might show you the other end of my long worktop. Now that is very untidy at the moment but I might get chance to have a bit of a sort out before next Wednesday. To see what the other WOYWWers have been up to this week or to join in yourself go visit Julia here. I'm hoping to visit a few more than I managed last week myself.

Thanks for looking and have a happy week.

PS I forgot to say WELL DONE to the England footie team. I actually watched most of the match this afternoon and thoroughly enjoyed it except that I nearly returned to my nail biting habits from childhood, Lol!
Posted by craftimamma at 21:04

Great pics Lesley, I love your wire hanging space for crafty things. The aniversary card is absolutly gorgeous. Love the constrast between that lusious blue embossed layer and the delicate pastels in the stamping and acetate overlay.

Your card is just stunning, Lesley. What a lovely effect you've got with the acetate and that dark background shows it off perfectly.
I love seeing what's on your desk, so much activity and your way of showing off things is great.
I must just say that I was stamping outside today and I thought about what you said about the heat and remembered to cover my stamp up when I'd finished with it-see we do take note!!
Can't wait to see more of your creations.
Hugs Lisax

Great pics Lesley. The card is stunning - really effective with the embossing, and I like the bubble edging as well.

You are so tidy, and I like your metal hanger-up thingy. My desk is a mess, and my room is not much better. I want to re-org but not sure where to start at the moment, and I think I need to wait for a cool day.

Love the metal wall hanging. That card is great, but I just know if I got that stamp it wouldn't look half as good and wouldn't have thought to use watercolours to give it that lovely soft feel.
Linbyx

Ohh lovely work Lesley - your watercolour card is gorgeous. Will be patient about seeing your Linda E style hanging! Love the wall art you use to display,what a fab idea. as for the stamps - yep, any prolonged exposure to light..I used to work in a shop where they put shelves over a window and stored the workshop stamps on them..I think it was only a matter ofmonths before the rubber started to get sticky and unuseable and then it just crumbles. Heart breaking!

Great to see your work spaces Lesley - they look quite tidy to me! I can't imagine what that heat must be like, at least my shed never gets that hot because it is shaded in the summer by all the trees.

Gorgeous card, very stylish - that egde punch is very nice too. The colours work beautifully, I am sure the recipients will be delighted. Moonglow always works a treat doesn't it?

I love that card and the effect you have achieved with that super stamp (on my wish list). Thanks for sharing an insight into your work room.

That's a stunning card lesley, & thanks for sharing your lovely workspace! x

Love what you're doing, and fabulous wall hanging, I'd add things to it too, it just gorgeous for doing that. love your cards and your very tidy crafty space!
Have a crafty day!
((Lyn))

I love your wall hanging - very inspirational and colourful! Love the cards too.

Love your style and enjoyed peeking at your desk. That metal wall dec is wonderful. Did you make or buy it? Congrats you are defo tidier than me!
Have put you in for my blog candy which will be drawn tomorrow!
Jo

Oooooh I love this last stamp. It's gorgeous and so is the card you made with it!
Chrissie

Neat workspace! I really like the metal wall hanging - so cute and useful!
Inspired,
Amy

That is indeed lovely! The image is breathless and the embellishments make it really pop! Gorgeous!

A great workplace Lesley and I love that metal wall decoration thingy, the card is pretty amazing too. Love it!
x Michelle

Oh my word - it must be like crafting in a sauna! Love that wall hanging though - just gorgeous and your candle holder! The card is beautiful, really love the soft colours you've used on the image and then that bright blue behind it.

love your busy work desk and your Anniversary card is so pretty!! Thanks for the sweet comment on my USAQ project...there's still time for you to join in on the bloghop!!

Thank you so much for you kind word you left today on my blog. I hope you continue to stop by and see what else i have made with the UsArtQuest Kit!

i love your photos! and what a pretty card you have made as well

Love the pictures of your workspace. Love that stamp. (I am guessing not Hero arts but Stampendous? I love mine too)

Thanks Sue, I bought two cling stamps at our Alexandra Palace Exhibition - one Hero Arts and one Stampendous. Of course, I had to go and get them the wrong way round on here didn't I, Lol!!! Off to edit the post now.

Ooo, eye candy... love it! Guess I'm just plain nosey but I love to see peoples work, where they work and the results of shopping trips - thank you for sharing Lesley. Your card is lovely and that stamp is totally fab!
I'm dying to hear what you bought at TK Maxx, I took my Mum out on Saturday and we spent 4 hours in the store... my boot was rather full at the end of it, not all mine you understand, but the studio has some nice new additions!
Lynn x

I LOVE your wall decor-what a fabulous idea!!

Your sapphire card is fab. What a very sophisticated result. Your usual excellent taste! Those flowers look so fiddly so I'm full of admiration that you have made such a professional job of them.