I was asked to make a birthday card for a man who is a member of the Royal National Lifeboat Institution so I thought the Nautical Themeplate from Aspects of Design (available from TheStampman) would be perfect. 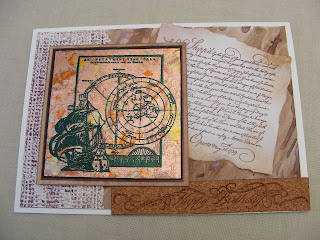 The main piece of backing card was made using Moonglow Inks and so was the piece of mesh effect paper which is actually Anaglypta. The galleon stamp was stamped with Versamark onto heat resistant acetate and embossed with Moonglow Emerald Obsidian (I think) EP and I then used a sheet of double sided adhesive to put gilding flakes on the back. I matted it onto dark brown card and then onto a piece of card from my 'bits and pieces' box which was sprayed with Glimmer Mists. I stamped the script using Sepia Versafine then tore the edges and 'antiqued' it with Ranger Distress Inks in Vintage Photo and Milled Lavender. The sentiment was from a QVC kit bought ages ago stamped onto a piece of cork. I used another sail ship from the Nautical Themeplate to stamp on the insert and also on the envelope and watercoloured them a little and tore and inked the edges of the insert. I also used a Krylon Copper Metallic Pen to edge several of 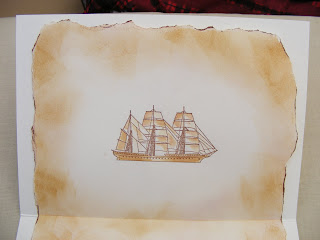 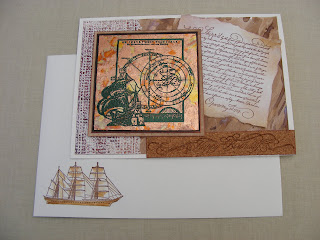 nd added touches of Glimmer Mist to the sail ship with a waterbrush.

This last photo is a bit of fun that turned out quite nicely. My son made me some paper roses from kitchen roll and I decided to Glimmer Mist them (if it stands still long enough it gets sprayed). I think they look lovely! 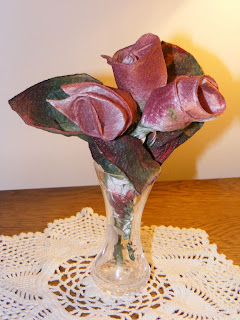 To finish off this post, a few weeks ago when I visited Fountains Abbey (see earlier post) I bought a little book which amused me -Wicked Wisdom : A Cynic's Dictionary. These are a couple of quotes from the book.

Appeaser - One who feeds a crocodile, hoping it will eat him last : Winston Churchill

Antique - Something that's been useless so long, it's still in pretty good condition : Franklin P Jones

What a lovely man's card. Tasteful but very interesting. It's a while since I'd looked at these stamps. In fact I'd never taken much notice of the script stamp. You've made it look really stunning. And didn't the cork stamp well!

What a really wonderful card for a man! Very warm colors and what a work of art!

I loev the roses also!